The best-selling 4th of July t-shirts

4 of July… It’s getting closer – the greatest holiday in the history of mankind. The crowing culmination of American tradition, steadfast determinism, and freedom itself. It’s the ultimate moment of mouth-watering BBQs, the coldest of beers, and bombs bursting in air… It’s also a perfect time to supercharge print-on-demand sales by capitalizing on that patriotism.

Barbeques, picnics, cookouts, and other food-oriented familial gatherings are the most popular method of celebrating Independence Day

Now, while there have been some restrictions placed on social gatherings in the recent past, things have begun to open up – and quickly. However, freedom is always a cause for celebration…even if the party is a bit smaller. Indeed, this is a special cause. It’s somewhat intangible, but still a very real phenomenon coursing through every red-blooded American heart. The American colonies liberated themselves from the yoke of British imperialism on July 4, 1776. This birthing, a satellite freeing itself from arguably the greatest empire of all time was a truly remarkable accomplishment. Now, let’s discuss how to best monetize this patriotism. Everyone wants to have some red, white, and blue gear on Independence day. Indeed, there’s a certain pride taken by some in how many America-themed items they can wear on this special day. So, it’s a great idea to include a few shirts with correlating aspects.

4th of July t-shirts with the American flag 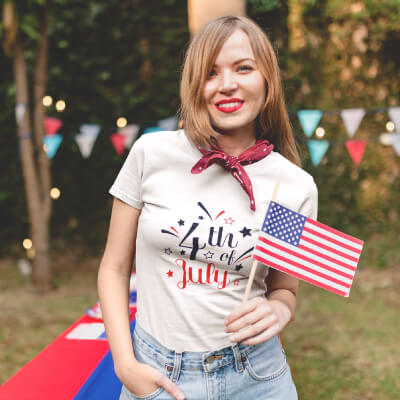 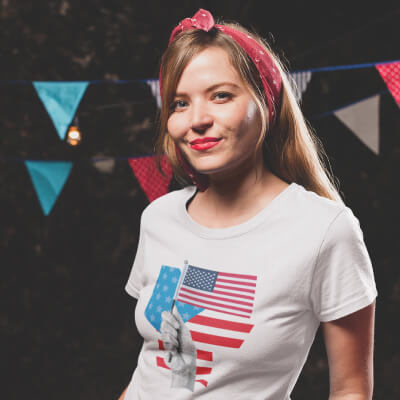 Designing a fresh 4th of July t-shirt with a bold American flag is arguably the first thing to add to your print-on-demand store. There’s an incredibly diverse range of colors, symbols, backgrounds, messages, and other interesting additives to attract some customers.